Thin and of a medium height and attractiveness, he makes up for his physical shortcomings with a ready wit and easy humor.

The younger of the Gaines twins, the youthful Florian was driven to earn his father’s approval, and thus began to study medicine at an early age, finding he had the family’s knack for it. He embraced school, religion, and family life, eager to please the elder Gaines.

In 1918, when the United States was committed to the Great War, his father volunteered to serve, believing that it was a higher calling to serve the allies of freedom. This cost him his life, and without the guidance of his father, Florian began acting out. His mother attempted to bring in the senior Mr. Gaines, Florian’s grandfather, to help straighten the boy out, but he only succeeded in convincing Florian to continue pursuing his medical career for the sake of his mother and sister.

In high school Florian excelled in his studies, but combined that drive with a desperate-seeming need to defy authority. It was with a great sigh of relief that he graduated from high school in Boston and was accepted to Miskatonic University. 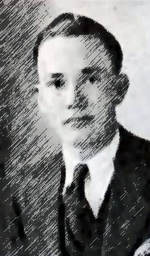